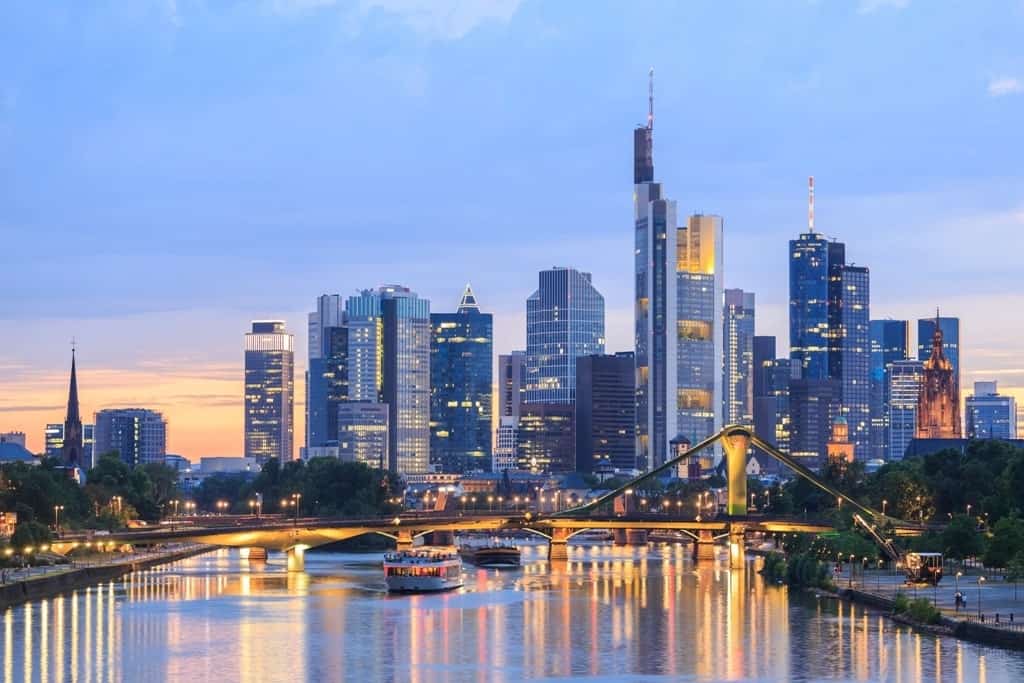 Frankfurt am Main is a buzzing business and financial hub, home to one of the world’s largest stock exchanges and the headquarters of the European Central Bank. Business travelers flock to Frankfurt from across the globe. But, at heart Frankfurt is equally seated in the old world with traditional half-timbered houses and a charming medieval old town. A perfect winter destination for the business and leisure traveler alike, here are 11 things you don’t want to miss during your winter holiday to Frankfurt am Main:

Frankfurt can receive some pretty chilly weather in winter with temperatures sitting between 0-5°C in the day and around freezing at night. If the winds come in from Russia though, Frankfurt can feel much colder with eastern fronts dropping temperatures down to –10°C or even -15°C! While Frankfurt doesn’t tend to receive that much rain during the winter months (with the summer actually be the rainiest season in the city), snow is fairly common and it can often settle and last for days on end. You’ll therefore want to pack accordingly so you’re not caught out by sleet or snow.

If you want to travel to Frankfurt in winter but want the best of the weather, you’re better off travelling earlier in the season as November receives minimum temperatures of 3°C and highs of 8°C, compared to January which averages -1°C and has highs of 4°C – brrrr!

Of course, you may be lucky and have winds coming in from the west which may bring temperatures up to 10-12°C but I wouldn’t count on that happening!

Check out the average temperature for Frankfurt in winter:

Frankfurt in winter: 11 things to do and see

Frankfurt has one main Christmas market and it’s one of the largest and oldest in Germany. If you are visiting between the last week of November and the day before Christmas Eve, it’s a must do. The market takes place in the historic part of the city around Römerberg and Paulsplatz.

The history of the Frankfurt Christmas market dates all the way back to 1393 when mystery plays were performed for the advent season. Today, this beautiful Christmas market is surrounded by whimsical half-timbered buildings and a glittering 30-meter tree trimmed with 6,500 lights and over 300 ribbons. Stalls line the entire area selling Christmas market favorites such as bratwurst, mulled wine, and impressive handicrafts.

Some of the Frankfurt Christmas market’s specialties include marzipan mixes. Benten, which are rectangular, and Bettmännchen, which are mounds with almonds around the sides are the most famous.

You’ll also find plenty of Quetschemännchen. Young men would send these figures to the ladies they wanted to woo. If the girl didn’t return the figure, she welcomed the man’s affections. If she returned it, he knew she wasn’t interested!

#2 Pealing of the Bells

If you find yourself in Frankfurt on the 1st Advent Saturday or Christmas Eve, you’ll be lucky enough to witness the pealing of the bells. This magnificent event only takes places 4 times a year (the other 2 days are the day before Easter and the day before Whitsun, or Pentecost).

During the pealing of the bells, 50 bells from 10 of Frankfurt’s downtown churches ring simultaneously for 30 minutes. Since the bells ring for so long, grab a steaming glass of glüwein or hot apple wine and take the time to walk to various points around the city to catch the different sounds in each spot.

Frankfurt can get quite chilly in winter. Locals and visitors alike have been frequenting the PalmenGarten to escape from the chill for over 140 years. The tropical paradise is brimming with over 20 hectares of exotic plants and is the largest botanical garden in Germany. From the middle of December through the middle of January, the garden puts on a magical winter lights show. A trip to the PalmenGarten costs 7 euro.

Even if you’re not a fan of opera, a visit to Frankfurt’s Old Opera House (Alte Oper) in Opera Square is a must. The original building from 1880 was destroyed during World War II, but was it was rebuilt in 1981. Today it serves as one of the city’s most important cultural venues.

This remarkable Roman Catholic Gothic-style church was constructed of red sandstone between the 13th and 15th centuries. At 95 meters-tall, its spire still manages to stand out among the sea of Frankfurt’s modern skyscrapers.

St. Bartholomew’s was one of the few churches in Germany to be designated as an Imperial Cathedral and it served as the site for the coronation of the Emperors between 1562 and 1792. You can climb the tower for a panoramic view of of the city.

Germany is undoubtedly known for its delicious beer. However, when in Frankfurt, the drink of choice among locals is the regional Hessian favorite–apple wine. It’s the city’s most popular beverage and is ingrained in the local culture.

You can even take a ride on the Ebbelwei Express on Saturdays, Sundays, and public holidays. The streetcar tours are held between 13:30 and 19:00 and tickets are available on the tram. The apple-themed ride costs 8 euro and includes a bag of pretzels and a glass of apple wine or apple juice.

#7 Shopping Along the Zeil

The Zeil is Frankfurt’s oldest and most popular shopping districts. Filled with every brand name you can imagine, the Zeil is one of the highest revenue shopping streets in all of Europe. The futuristic design of the Zeil gallery is a sight to see in itself.

Visiting Frankfurt’s Museumsufer, or Museum District, is a fantastic way to spend your time. The district is comprised of a collection of separate museums along the south bank of the River Main. Check out the Museum of World Cultures, one of Europe’s foremost ethnological museums which contains more than 65,000 artifacts from all over the world.

Or stop by the rare and intriguing Icon Museum which is home to more than 1,000 Christian Orthodox images. But, the cherry-on-top is the Städel Art Museum. Home to a priceless collection of works of art by the old masters including Rembrandt, Goya, Vermeer, Monet, Degas, and Picasso.

What’s winter in Germany without a little time on the ice? Lace up your skates and hit the ice at the main rink of Frankfurt’s Eissporthalle. 6 euro will gain you access to the large oval-shaped outdoor ice rink.

The Main Tower stands 259 meters above the city of Frankfurt and is the fourth tallest building in Germany. You can only go up 198 meters to the visitor’s platform, but the views over the city are brilliant. Tickets are 7.50 euro and to avoid long the long line at the tower. But, as it’s such a popluar attraction, it’s recommended to buy tickets online.

#11 Visit the Geldmuseum at the Deutsche Bundesbank

You can’t visit the financial epicenter of Germany and not talk about money. Frankfurt is home to commercial institutions, big banks, the country’s stock exchange. A trip to the Money Museum, or Gelmuseum, walks you through the city’s financial heritage and the history of money and its evolution around the world. Ironically, admission is free.

How to get around Frankfurt in winter

Using the U-Bahn is the best way to get around Frankfurt in winter as it is a reliable, affordable, covered way to travel. The U-Bahn system runs both under and overground and you can easily buy tickets from the ticket machines which are available in a variety of languages. If you want to travel to the suburbs or to the airport, you’ll need to take the S-Bahn (S8 or S9) which serves Frankfurt Main Station (Hauptbahnhof). Alternative modes of travel within Frankfurt include trams and buses which cover much of the city.

You can choose whether you want to purchase single tickets or day passes or, depending how long you are staying and what you plan on doing, you may consider buying a Frankfurt Card. This card allows unlimited travel on Frankfurt’s public transport system (city zone and airport) and discounts in many museums.

What to pack for a trip to Frankfurt in winter

If you’ve read the weather section above, you’ll be aware that lots of warm clothing is definitely required when planning a trip to Frankfurt in winter! Pretty much everyone you see will be wrapped up warm in winter coats, boots, hats, scarves and gloves. You might even want to pack some thermals if it looks like the weather is going to be particularly cold! Layers in winter are always a good idea too as when you hop on public transport or head in and out of museums, you’ll be much warmer than you will be outside.

While it never hurts to pack a small umbrella in your handbag if you have space, you’re unlikely to be wanting to use an umbrella when walking around crowded Christmas markets.

When packing toiletries for a trip to Frankfurt in winter you’ll want to pack moisturiser and lip balm as the cold outdoor temperatures mixed with fierce heating in traditional German restaurants and beer halls.

Frankfurt is one of Europe’s most well-connected cities. Home to Germany’s largest airport, and a hub for the German train system, Frankfurt is easy and affordable to get to from almost anywhere in the world.

The best Christmas markets in Germany

Best Places to visit in Germany in winter

Most beautiful medieval towns and cities in Germany

Things to do in Heidelberg in winter

How to spend one day in Dusseldorf

Things to do in Freiburg