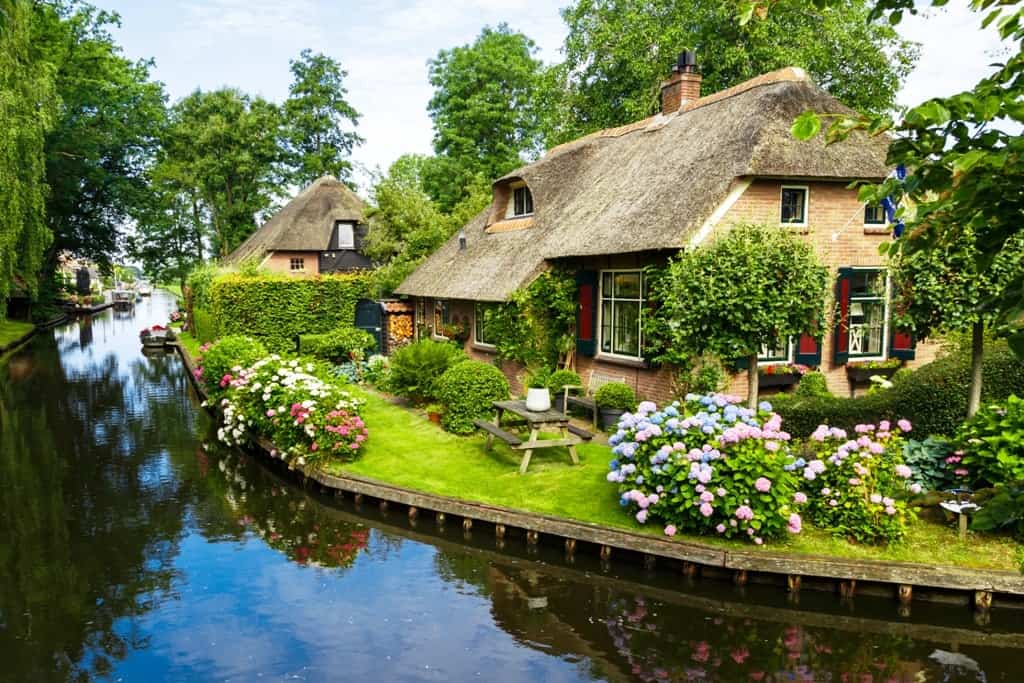 Check out my 5-day Amsterdam itinerary.

While Amsterdam is the capital of the Netherlands, unusually it’s not were you would find either the seat of the Dutch government or the Royal Family.  If you want to visit the Dutch Prime Minister at his house in the Binnenhof or say hi to King Willem-Alexander at his residence in the Huis ten Bosch Palace then you will want to visit The Hague.  It really is a city with everything.

From a cultural perspective there is lots for art lovers to enjoy, the most famous of which is the Mauritshuis, which is home to the famous painting “The Girl with a Pearl Earring” by Vermeer.  When it comes to modern art, the Gemeentemuseum is the centre of the De Stijl art movement with exhibitions from Piet Mondrian.

In a slightly frightening modern world, you can feel the love at the Peace Palace that’s the home of the International Court of Justice.  You can visit a miniature version of the Netherlands at the Madurodam miniature theme park and even have fun at the beach in Scheveningen.  To get to the Hague take a train from Amsterdam Centraal, the journey only takes about 45 minutes.

The second largest city in the Netherlands is Rotterdam, it’s Amsterdam’s often overlooked and slightly smaller brother. Having been significantly rebuilt after World War 2, it’s a city that is famous for its vibrant and stunning architecture.  It’s an inspiring and unique city that also embraces its maritime history.

The amazing architecture starts right when you arrive at Centraal station. Not far away is De Markthal, which is an enormous and stunning place where you can eat, drink and soak up the Dutch atmosphere without even getting wet when it rains. There’s also the iconic De Rotterdam building with its 3 towers, Piet Blom’s Cube Houses (be sure to check out the inside of one of the houses) as well as the 800 metre long Erasmus Bridge. Also, take time to climb to the top of the Euromast viewing platform for great views across the city.

For a bit of history, you can also wander the streets of Katendrecht where sailors of old used to drink on shore leave. Also be sure to visit the historic Delfthaven. If you have time, you could also take a water bus to see the Windmills of Kinderdijk. There really is so much to see in this wonderful city that’s just an hours train ride from Amsterdam.

In the North-East of the Netherlands about 120 km from Amsterdam is the beautiful water village of Giethoorn.  Often called “The Little Venice of the North” despite only having 2,600 residents it’s covered with over 90 km of canals and canoe trails.  There are almost no roads, which gives the village a calm and peaceful atmosphere that is almost unknown in today’s modern world.

The most important thing to do in Giethoorn is to rent a boat and explore this stunning village at a nice leisurely pace. If you are feeling a little more energetic you can even rent an inflatable ball and literally walk your way around the village’s waterway’s.  The town is such a perfect place to visit, it made its way onto Monopoly’s 80th birthday edition board. The easiest way to get to Giethoorn is to drive from Amsterdam but you can also get there by train by taking the Intercity train to Steenwijk and then taking a bus.

Lelystad and the IJsselmeer

The story behind the town of Lelystad is a very interesting one.  Until 1932, it was the seabed underneath the water of Zuiderzee.  The town of was only founded in 1967 and it sits of reclaimed land approximately 3 metres below sea level (making it one of the lowest cities in the world).  Lelystad is therefore a brand new city almost like no other in the world and is named after Cornelis Lely who was the genius engineer responsible for the Zuiderzee land reclamation project.  The is less than an hour from Amsterdam by car or just 40 minutes on a direct train from Amsterdam Centraal.

Naturally, the water plays a key role in life in Lelystad and a great place to learn more about the area is at the Oostvaardersplassen Nature Reserve.  You can also learn more about the Dutch maritime history at the Batavia Yard Museum that has a replica of a 1628 ship that sailed for the Dutch East India Company.  Another place worth checking out is the New Land Museum where you can check out the story behind the reclamation of the land in this part of the Netherlands.  Finally, switch to a different mode of transport at the Aviodrome, which is one of the best aviation museums in the whole of Europe.  There are famous Fokkers everywhere from the early days of aviation to the Fokker 100 from the early 2000s.  There is even an enormous Boeing 747 that you can walk around.

If you are feeling adventurous or perhaps are visiting Europe for a once in a lifetime trip you could head a little bit further from Amsterdam and visit the stunning Belgian city of Bruges. It takes less than 3 hours on the train to get there, changing in Antwerp on the way.

One of the first things to do in Bruges is to take a canal boat tour to get your bearings. Next head for the market square and try to work out which way the Belfort Tower is leaning. Bruges is a great city to wander around and enjoy the atmosphere. It’s compact size means you can explore the city in no time at all. If you weren’t aware, Belgium invented French Fries, just don’t call them French when you take a trip to the Friet Museum. Bruges also has some amazing chocolate shops, the best of which is probably The Chocolate Line from Shock-a-latier Dominique Persoone who famously invented a chocolate sniffing device for The Rolling Stones.

Finally, to finish off the Belgian experience take a tour of the Half Man Brewery to sample a drop of famous Bruges beer. The beer is still brewed in the city center but because of a lack of space for a bottling plant, the beer is piped outside the city for this part of the process. Finally finish the day sampling beer and local food at the cute little De Garre bar famous for its cheese platters.

Book a day tour from Amsterdam to take care of transport and other included activities for you. I recommend:

John Franklin is passionate about supporting independent, family run businesses. John tells his stories about different places, attractions and the people who put their life and soul into helping others through his From Real People blog.