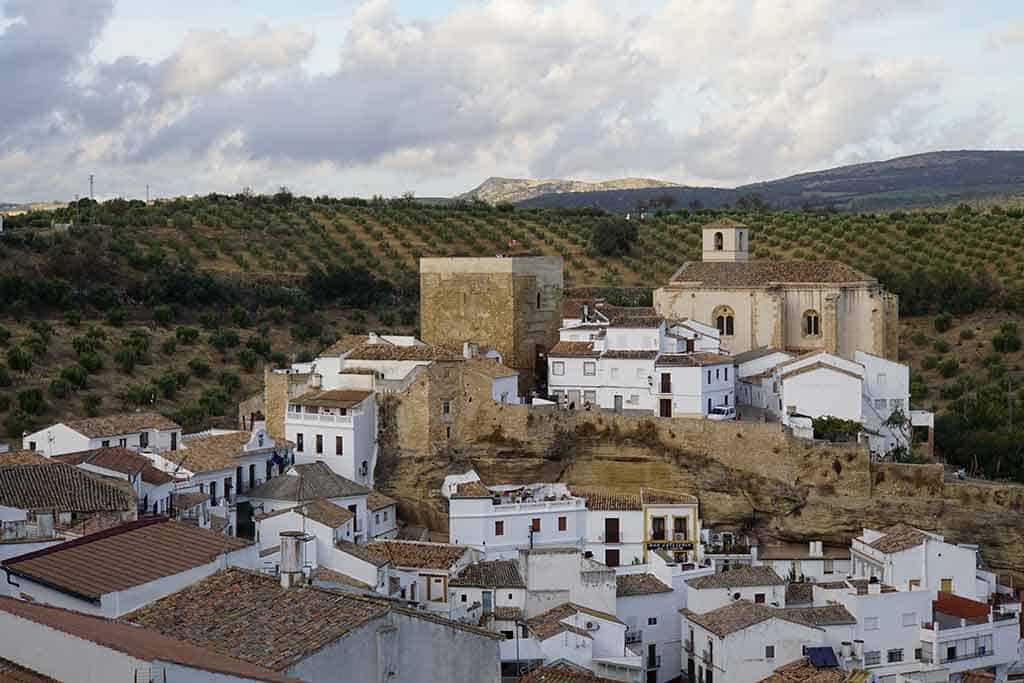 The Pueblos Blancos, or white villages, lie scattered across the southern Spanish hills of Andalucia. Many were once fortresses that stood between the Christian and Moorish territories, between Cadiz and Malaga, and many names end with “de la Frontera,” or “of the frontier”.

These charming villages are known for their dramatic landscapes, unique beauty, seclusion (many located on hilltops), and their rich history and inevitable ruins. Their name comes from the whitewashed buildings that make up the towns, done at first in order to keep the interiors cool in the sun, now most towns require that the buildings are kept whitewashed.

5 Pueblos Blancos to Visit in Andalucia

Map of the Pueblos Blancos of Andalucia

One of the most famous white villages (more a town than a village) is Arcos de la Frontera. Perched dramatically atop a sandstone cliff, this town was once a frontier town in the Reconquista in the hands of the Moors, although it had been settled long before that, primarily due to its strategic defensive location.

Arcos is a maze of cobblestone streets that wind steeply uphill through town to Plaza Cabildo, where you will find the 15th-century church, built on top of the remains of a Moorish fortress. It offers extraordinary views across the valley below, and incredible views from the valley, as the whitewashed buildings barely peek over the edge of the cliff. Arcos de la Frontera has been a national historic monument since the early 1960s.

Arcos de la Frontera is often considered one of the most beautiful and most famous of the towns, and as a result, has more restaurant and hotel options than some of the others.

Grazalema is a tiny village settled on a ridge deep within the Sierra de Grazalema National Park. It doesn’t overlook the valley below but is rather surrounded by towering mountains known as Penon Grande. Thanks to its unique location, Grazalema and the national park is one of the rainiest spots in Spain.

Grazalema is the most popular base for hikers and climbers in the national park and is, therefore, a lively village with plenty to do. At the heart of Grazalema is the Plaza de España, lined with bars and restaurants, and where you can also find the 18th-century church of La Aurora. Just a short walk from the square is the 17th-century Iglesia de San José, a former Carmelite convent.

Grazalema was founded by Berber settlers who brought sheep to graze in the mountain pastures and to produce wool for ponchos and blankets to protect themselves against the wet climate. While the village was conquered in 1485, the textile industry continued to grow and can still be found in Grazalema today. You can purchase ponchos and blankets, along with other local products, at the tourist shop in town.

Zahara de la Sierra is a picture-perfect postcard village perched on the side of a cliff in the province of Cadiz above a crystal clear lake. High above the town, at the top of the cliffs behind it, is a 13th-century Moorish fortress. For this, British explorer Richard Ford called Zahara de la Sierra a “Moorish eagle’s nest”.

Plaza Mayor is Zahara’s main square, surrounded by the Church of Santa Maria de la Meza, the tourist office and town hall, and plenty of cafes and bars. There is also a viewing point from which you can see the neighboring town of Olvera and the reservoir lake below.

More town than a village, Ronda is still one of Andalucia’s most famous towns. Known for the deep gorge of the Rio El Tajo, Ronda’s main attractions are the bridges that span the chasm, the charming old town, and the oldest bullring in Spain. On one side of the gorge is Ronda’s old Moorish town, and on the other is the “new” town, which dates to the years following the reconquest.

There are only three bridges that span the gorge: the Puente Nuevo (New Bridge), Puente Viejo (Old Bridge), and the Puente Romano (Roman Bridge). The New Bridge is something of a misnomer, as it was built in the late 1700s, but as its newer than either of the others – the Old Bridge was built in the early 1600s, and the Roman Bridge actually dates from Ronda’s Moorish period, between the 9th and 15th centuries.

Because Ronda is a larger town than most of the other Pueblos Blancos, it’s a great place to stay for a few days to explore this region in depth. It also has plenty of bars and restaurants as well as hotels to stay at.

Check out: Things to do in Ronda.

Named for the wineries of southern Spain – bodegas – Setenil de las Bodegas is unique among the Pueblos Blancos for its setting. Unlike the others, which were mainly settled on ridges or other dramatic locations, Setenil de las Bodegas grew out of a network of caves in the cliffs along the Rio Trejo. The houses seem to grow out of the caves. Many have rock roofs or roof gardens too.

Setenil de las Bodegas has been settled, definitively, since the 12th century – we know this because the fortress dates to this era. Evidence of nearby cave-dwelling settlements that date back 25,000 years, though, indicate that this area may have been settled long in the past. Certainly, Setenil was comfortably settled when the Reconquista occurred, as we know that the Christian rulers (the duo of Ferdinand and Isabella from Granada) expelled the Moorish Nasrid rulers.

Setenil comes from this time, referring to the Latin phrase septum nihil, or “seven times no” which refers to the seven times that Ferdinand and Isabella tried to take back the town from the Moors and failed. The full name comes from the 15th century, when the village began to produce olives, vineyards, and almonds, and store these in warehouses or bodegas. The ruinous phylloxera virus decimated the vineyards in the 1800s, but the olive groves and almond production still exist.

Like the other Pueblos Blancos, Setenil de las Bodegas has a rabbit warren of steep, narrow, cobblestoned streets. Some of the highlights include the ruins of the Moorish fortress, the Church of the Encarnación, and the narrow, cliffside streets covered by natural rock.

How to Explore the Pueblos Blancos

These unique villages deserve all the time you can give them, but a few of them can be done in a day. If you have time, start in Seville and drive into the national park to explore Arcos de la Frontera first. Enjoy a coffee in the square and marvel at the outstanding views, then drive through El Bosque to Grazalema.

Have lunch here and explore the narrow streets before continuing on to Zahara de la Sierra for the afternoon. Overnight in Ronda, and then spend the next day exploring Ronda and visiting Setenil de las Bodegas. There are plenty of other towns as well, and if you have time you can easily add them on to this itinerary.

The Pueblos Blancos of Andalucia are a unique and interesting place to explore. Numerous villages beckon, and I highly recommend spending time in this culturally rich and oft-skipped part of Spain.

Planning to explore more of Andalusia? Check out my following posts:

How to spend a day in Seville

The best day trips from Seville