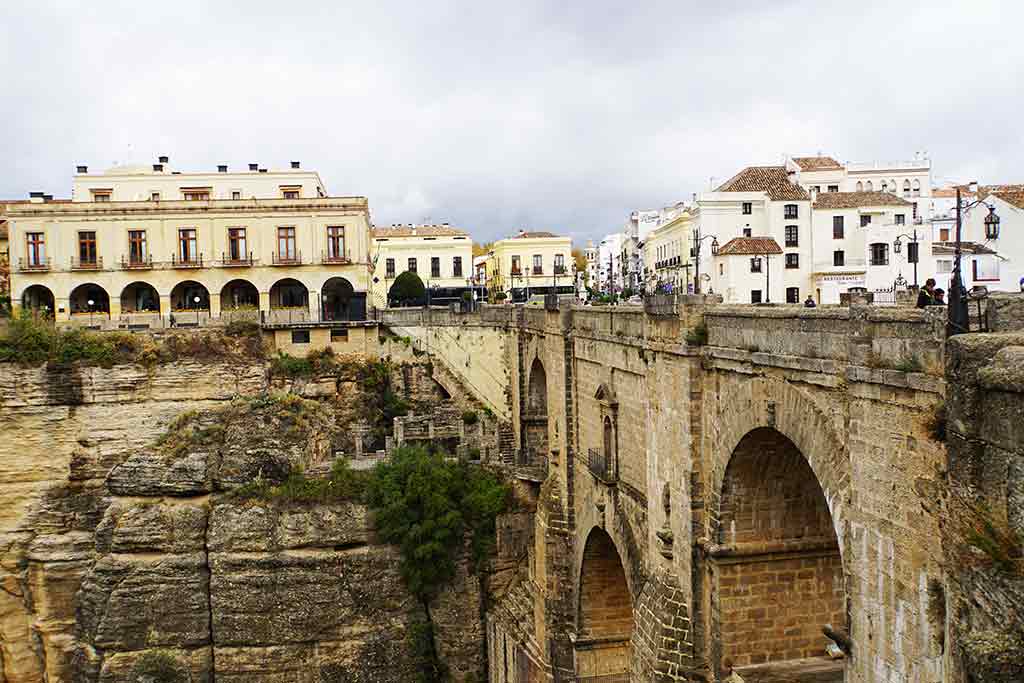 Etched into the dramatic mountain landscape of the El Tajo Gorge in the Andalucía region of Spain, lies the gorgeously breath-taking town of Ronda; it has a vast and fascinating history, dating back to centuries of social outcasts, outlaws and rebels, as well as being the birthplace of modern bullfighting, which began in the late 18th century.

Today, many visitors are attracted to the region and in particular, the town of Ronda, because of its magnificent appearance, the unbeatable views that it offers, as well as its many attractions, such as parks, palaces, restaurants, and hikes; this list will highlight its key areas of interest, as well as practical information.

12 Fun Things to Do in Ronda Spain

Meaning ‘new bridge’, Puente Nuevo is the newest and largest of a total of three bridges that divide the city of Ronda. Construction of this bridge began, and was designed by Jose Martin de Aldehuela; it has a total length of 66 meters, and a height of 98 meters, and is a popular tourist destination in Ronda.

Whilst Puente Nuevo is the largest of the three bridges that span across the chasm of Ronda, Puente Viejo is the smallest one, and is also the oldest. It was built in the year 1616, and much of its original construction is still visible. The bridge attracts many tourists for its interesting history, as well as the beautiful views that are visible from it.

This gorgeous palace dates back to the 18th century, though there is a large amount of renovation work that has been done in recent decades. The house feels as though it has jumped straight out of a historical novel, with its mysterious yet fascinating quirks, differing levels, and many staircases. The house is open daily to the public from 10:00 am – 19:00 pm.

This historic site dates back to the 13th and 14th centuries, and beautifully backs onto Ronda’s river, providing breath-taking views of the surrounding scenery. The Banos Arabes are essentially historic Arab baths, and are in remarkably good condition; there are gorgeous architectural features such as its horseshoe arches, vast columns and dividing sectors.

Renowned by many as Ronda’s highlight, The Palace of Mondragon was formerly the home of King Abbel Malik, and later the home of the last Arab governor, Hamet el Zegri. The Palace is absolutely stunning, with a series of historic artifacts still intact, as well as an array of architectural features from a range of different eras, which gives a fascinating insight into the layers of history that have occurred at the site

At a whopping 120 meters deep and 223 feet wide, El Tajo Gorge is a vast natural wonder. It makes for an absolutely wonderful place to go hiking, as there are so many different views available; it is also perfect to see during sunset. However, it is important to note, that hiking in the El Tajo Gorge is not for the faint-hearted, as it is very steep and rocky!

Having been originally built in the 14th century, Iglesia de Santa Maria la Mayor is a large church in the center of Ronda and has a wonderfully distinct appearance and charm to it. The church has a rich and varied history, with evidence of the current church being built upon the foundations of an earlier structure, dating back to the Visigoth period; visitors are attracted to the church because of its many layers of fascinating history.

Construction of the Alameda del Tajo botanical gardens began in the 19th century, and it is one of the very few botanical gardens in the whole of Ronda. The gardens are stunning and have a rich variety of trees, plants, and flowers, including some trees that are approximately 200 years old. This is the perfect place to visit on a warm summer’s afternoon.

Mirador de Aldehuela is a historical landmark, and central to Ronda’s heritage; it was built by the same architect who designed the neighboring bridge, Puente Nuevo, and also the town’s bullring. The Mirador de Aldehuela is a beautiful sight, and it is particularly stunning at sunset, as the surrounding scenery looks gorgeous; a trip to Ronda is not complete without visiting this site.

Plaza de Toros is a famous Bullring in Ronda, and it was created during the 18th century; after its construction, the Romero family of Ronda offered three generations of bullfighters, including Pedro Romero, who famously slew just under 6,000 bulls. Today, there is a fascinating museum on site, which displays various memorabilia from two centuries of fighting.

Arguably the most beautiful open space in Ronda, Duquesa de Parcent Square is a gorgeous public space in the center of Ronda, and could be considered its true heart; there is a stunning Renaissance church in its center, as well as lots of green space, benches and pathways, that are often busy with people meeting, children playing, or market stalls.

This enormous 13th-century fortress was a historical defense system for the city of Ronda during the Middle Ages and Renaissance; it was initially built as a portal to the town’s citadel, and many visitors are attracted to the site today as a way of getting a glimpse into Ronda’s historic past. For the age of it, it is in incredibly good condition.

How to get to Ronda from Malaga

Car – Though you can get from Malaga to Ronda by car, the roads are windy and narrow, and a private tour is the best way to experience it; the car journey would take approximately 1.5 – 2 hours each way.

Guieded Tour – Taking approximately 9 hours, and with the comfort of an air-conditioned motor coach, this tour will take you from Malaga to Ronda, taking you to all of the key hotspots around the city, with a free guide highlighting all of the key information of each site. There is free time to wander around Sentil de las bodegas, Marbella and Ronda, and truly take in the beauty of the region.

Public transport – There is a direct train from Malaga to Ronda which takes two hours; it is Spain’s national rail service, Renfe, and it costs 24 euros return.

How to get to Ronda from Seville

Guided Tour – Set off early in the morning from the gorgeous city of Seville, to explore the amazing city of Ronda and the surrounding countryside with this fantastic private tour. Tour through the magnificent Andalusian villages and countryside, discovering its vast, rich, and varied history; you will have time to stop and admire key sites, with the useful expertise of a specialist guide.

Public Transport – You can take to Los Amarillos bus from Prado de San Sebastian bus station in Seville to get to Ronda; the tourney takes two and a half hours each way.

How to get to Ronda from Granada

Car – Taking just over two hours, you can drive to Ronda from Granada, however parking in Ronda is challenging; take the A92 to exit 146, before merging onto the A384, before taking the A357 and then finally the A367.

Guided Tour – Taking approximately 7 hours in total, this wonderful private tour takes you from Granada all the way to several notable Andalusian cities, with the useful stories and expertise of a local guide; you will see several different mountain ranges, the gorgeous countryside, and the atmospheric charm of the various different cities.

Public Transport – There is no direct bus to Ronda from Granada, but you can take the train, as of 2019. It takes approximately three hours each way and costs 20 euros.

As this list has highlighted, the Spanish city of Ronda is a truly unique, charming, and atmospheric place, with an abundance of history, heritage, and things to do for people with all types of interest. It is easy to get to from cities within the region, and there is so much just waiting to be discovered and explored – so, what are you waiting for?

Check out more things to do in Andalucia:

A road trip in Andalucia

Best places to see in Andalucia

The Pueblos Blancos of Andalucia

One day in Seville

Things to do in Seville in October

Things to do in Cordoba

One day in Cordoba