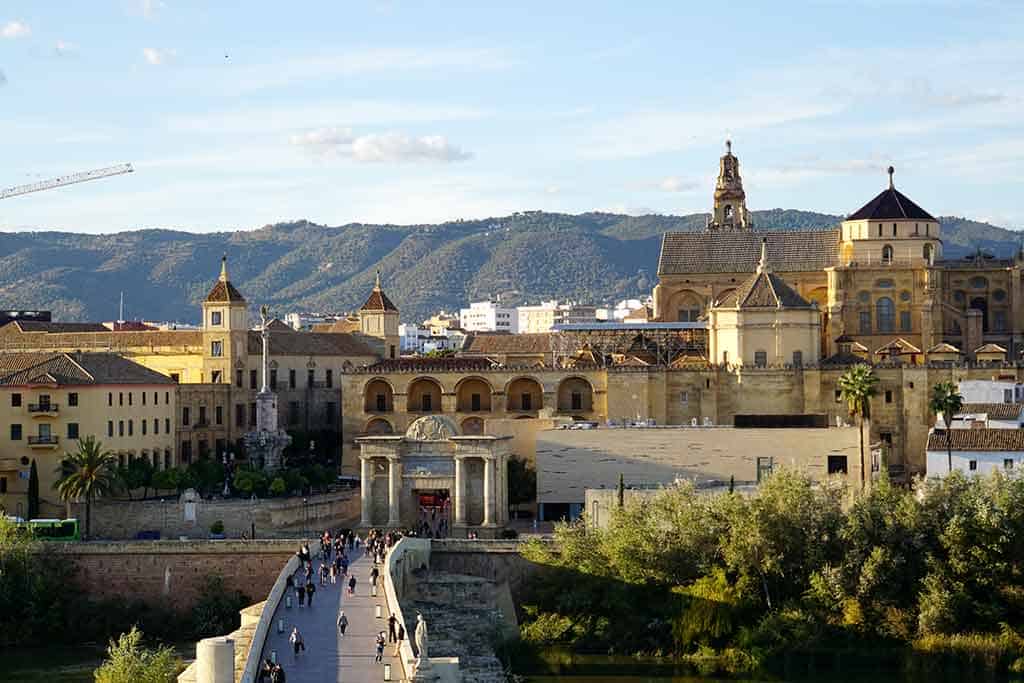 Located in Spain’s sunny Andalusia region, the medieval city of Cordoba is one of the three most visited cities in the region alongside Seville and Granada and is well known and loved for its Roman and Moorish architecture along with its delightful flowering patios. A melting pot of history and culture, history fans, architecture fans and those who go giddy over gardens will all find something to fall in love with here. So read on and discover what to see, where to stay, and how to get to the Spanish city of Cordoba, we’re sure you’ll be itching to buy your tickets by the end!

Map of Things to Do in Cordoba

15 Fun Things to Do in Cordoba

One of the most beautiful and unique buildings in the world, the Mezquita will delight you before you even step inside as you admire the golden doors around the facade. Dating back to the 10th century the Mezquita is one of the oldest buildings still to exist from the time the Muslims ruled Iberia.

Take a tour inside to see the iconic 850 red and white columns in the prayer hall, the Byzantine-style mosaics, and the details of the Renaissance cathedral build in the 13th century – prepare to have your jaw drop open in amazement!

Click here to book a guided tour to Cordoba’s Mosque-Cathedral.

This palace-fortress, the headquarters of the troops for the Catholic Monarchs, was the main residences of Isabella I of Castile and Ferdinand II of Aragon for over 8 years and it was here that Christopher Columbus discussed his plans for his first trip to America.

A museum with some Roman mosaics are what first greet visitors upon entering the Baroque Alcazar buildings but it’s the sprawling terraced gardens of the Alcazar that visitors fall in love with as they marvel at the water features, orange trees, statues, finding more and more ornamental delights around each and every corner of the gardens.

Click here to book a guided tour to Cordoba’s Alcazar.

The fortified gate known as Calahorra Tower is the oldest defense building in Cordoba, having been built by the Moors in the 12th or 13th century with later modifications by the Christians in the 14th century. Inside the tower, you will find 14 rooms spread over 3 floors with the Vivo de Al-Andaluz museum explaining the history of Cordoba at a time when Muslims, Christians, and Jews lived side by side.

Dating as far back as the 1st century, the iconic 16 arches Roman Bridge of Cordoba crosses the Guadalquivir river measuring in at almost 250 meters long. Reconstructed at various times over the centuries, the majestic bridge that can be walked across today dates back to Medieval times with cobblestone paving from the 19th century.

The bridge featured in series 5 of Game of Thrones, becoming the Long Bridge of Volantis with some technological help to extend it! Be sure to walk along the banks of the river to get a good view of the bridge in full after walking across it.

This beautiful Renaissance palace covers 6,500 square meters with 12 tranquil courtyards (patios) and art and antique collections spanning 500 years. Home to 17 descendants of the Marquis of Villaseca and Viana, step through the gates of the 15th century palace to see the beauty indoors and outdoors as you witness how styles changed over the years, each noble person putting their spin on the timeless gardens of this palace and added their own treasures to the collections within the grand house.

Reminiscent of Plaza Mayor in Madrid, Plaza de la Corredera in Cordoba is equally as grand with its arched porticos. Dating back to the 17th century when it was the site of public spectacles including bullfights and executions, it is surrounded by the old town hall and old jail buildings which are now beautiful balconied apartments. Enjoy tapas and a beer or glass of wine as you admire the architecture, people watch and soak up the atmosphere of his historic square.

The most iconic street in Cordoba the ‘alley of the flowers’ has blue painted flower pots filled with geraniums hanging either side of the white-washed walls of the narrow alleyway that leads from the Mezquita to a tiny yet quaint souvenir filled courtyard. Certainly picturesque, the alley is so narrow (and popular) that it’s best avoided during the height of Summer unless you jump out of bed early and make this your first stop of the day!

Snap a photo of the classic Corinthian columns that remain of the Roman Temple, only discovered in the 1950s due to the expansion of City Hall! Dating back to the 1st century, the temple was dedicated to the cult of the Emperor, the vast temple forming part of the Provincial Forum. Be sure to admire the columns during the daytime against the blue of the sky and again at night once they are illuminated in warm colors.

Known for being one of the most complete archaeological museums in the country, the Cordoba Archaeological Museum, located in the beautiful Renaissance former Palace of the Páez de Castillejo family, has artifacts dating from prehistory to the Middle Ages. Go back in time to explore the Iberian, Roman, and Visigoth cultures in the 8 rooms and 3 courtyards of the museum, key pieces including the Iberian Lion of Nueva Carteya and the Roman sculpture of the god Mithra not forgetting the recently excavated remains of the Roman Theater located in the basement.

Get enjoyably lost in the beautiful maze of narrow streets in the Jewish Quarter of Cordoba as you turn your back on the Mezquita and follow the maze of streets to the heart of the Jewish Quarter where you’ll find Maimonides Square and a 14th-century Synagogue, one of the best-preserved historic synagogues in Spain.

Orange trees, beautiful architecture, and city life are all around you as you keep within the boundaries of the ancient city walls – Walk and enjoy on your own, worrying about how you get back to your hotel later, or take a guided tour to learn more about the history you’re passing.

The ruins of this vast, fortified Andalus palace-city built between 912-961 by Abd-ar-Rahman III who was the first Umayyad Caliph of Córdoba are located 7km outside the city of Cordoba but are well worthy of visiting, especially for those looking to get their fill of Hispanic-Muslim history. Explore Azahara Medina, the largest archaeological site in Spain, as you come to understand the history of a city so stunning, it couldn’t be compared to any other in the world yet was destroyed after only 70 years.

Price: €1.50 entrance. Guided tours from €18. Day trips with transport from Cordoba including a 3 hour guided tour are available for €26.

Visit the remains of the Arab Baths (Baños Califales) and admire the vaulted ceilings with star-shaped openings, semi-circular arches, and marble pillars of the ruins that date back to the reign of Caliph Alhakem II. The museum takes you on a journey through time to learn how Cordoba would have looked back in the 10th century, at a time when the baths would have joined the Alcazar, and learn the importance and differences of the baths in the Islamic world versus the later Andalusian world.

End an unforgettable day by letting your hair down with a 90 minute authentic Flamenco show performed by local artists that takes place at the intimate and atmospheric 10th century Arab Baths – It sure beats a show in a modern setting!

Click here to book a flamenco show at the Arabian Baths.

14. Visit one of the many Hammams

Cordoba is full of traditional Arabic/Turkish public baths where you can let your worries wash away and sooth those aching feet in a setting that makes you feel like you went back in time to Moorish rule.  Some of the best Hammams in Cordoba to enjoy a luxurious steam bath and massage include Almanzor Arab Baths, Palacio del Bailio, and Hamman Aal Ándalus.

Enjoy a 2 hour guided walking tour around the San Basilio neighborhood to see the famous patios of Cordoba. Invented by the Romans to provide shade, the patios (courtyards) of Cordoba feature not only flowers but water features, mosaics, and a variety of other architectural design features.

Your guide will help you identify the most famous Spanish plants, inform you of the history of the patios, and how the residents maintain them today. As you walk from patio to patio you’ll also be able to admire the streets of the most beautiful neighborhood in the city.

How to get to Cordoba

Cordoba airport is located 6km outside the city but is only available for private flights, therefore it is not an option for most travelers to the city. Alternative airports include Seville, Jerez, Malaga, and Granada, all of which are 1-3 hours away.

There are daily coach services to Cordoba from the major cities including Madrid, Seville, Malaga, and Granada, as well as from the smaller towns and villages in Andalusia. Buses are the cheapest option to move between Spanish cities, tickets usually costing less than half of train tickets but journey times are much longer with Madrid>Cordoba taking 5 hours, Seville>Cordoba 1.5-2 hours and Granada>Cordoba 3-4 hours.

Where to stay in Cordoba

This 4-star boutique-style hotel is in a superb location on the banks of the River Guadalquivir with views of the Alcazar and Mezquita, all of these attractions and more a short 5-10minute walk away. With a seasonal pool on the roof, on-site restaurant-bar serving regional food,  and gym it provides comfortable accommodation for couples looking to explore the city.

Located in the heart of the picturesque Old Jewish Quarter, just a 5 minute walk from the Mezquita, this elegant guest house has a roof terrace where you can sit and soak up the sun whilst admiring the view across the city rooftops before heading out to explore all the sights which are within walking distance, though if you prefer, there is a bus stop close by.

If visiting Cordoba because of the patios, a stay at Las Casas de la Juderia located in the Old Jewish Quarter is a must as this boutique hotel is set within 27 traditional houses connected by gorgeous passages and courtyards – You might take a wrong turn to your room, to begin with, but every turn is enchanting as you discover fountains, sculptures, the rooftop pool, spa, and blooming flowers. Rooms feature tasteful classic décor with attention to detail in every nook and cranny to ensures a stay you remember.

Cordoba can be visited on a day trip from Seville but we highly recommend you spend 2-3 days exploring this stunning city that shows off its 3 very different sides with its Moorish, Jewish, and Christian influences all still very much visible to this day.

Planing a trip around Andalucia? Check out my guides:

Best Places to visit in Andalucia

One day in Cordoba

One day in Seville

The best day trips from Seville

The White Villages of Andalucia.

Things to do in Ronda.