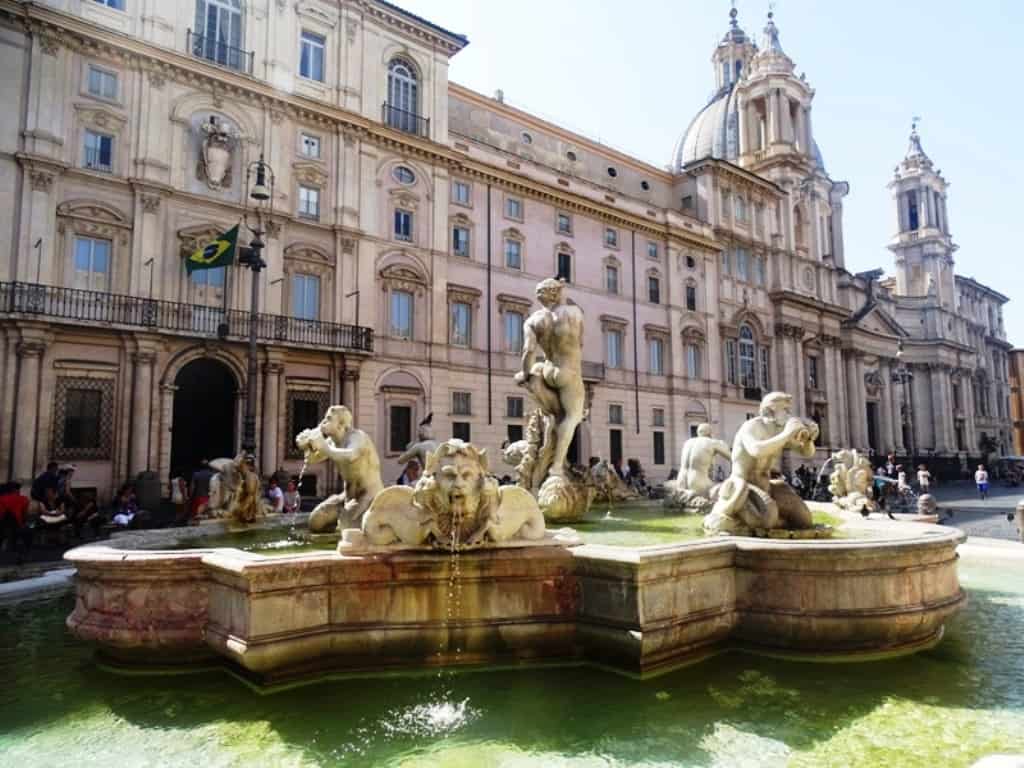 Rome, the eternal city, is a place you shouldn’t skip on an Italy road trip. It is a city with many archaeological sites, incredible places of worship including the Vatican, and small cobbled alleys that lead to piazzas with fountains: not to mention the food and the shopping. On our recent trip to Rome with my husband, we decided to stay in Rome for two days as it was the first time for him there. As we didn’t have a lot of time available and we didn’t want to miss the highlights, we decided that the day tour of Rome with Take Walks was a great way to see the city. Find here more details about this tour.

Our meeting point was opposite the Colosseum, where we met our guide Luciana and the rest of the group. After some introductions and a brief on what we would see during the day, we entered the Colosseum. Fortunately, our tour included a skip the line entrance as the queues were huge.

Check out what you can see in Rome in 5 days.

The construction of the Colosseum began in 72AD by emperor Vespasian and was completed in 80 AD by his successor Emperor Titus. It could hold around 50.000 to 80.000 spectators, and it was used mainly for gladiatorial contests.  Our guide explained to us how these games took place and some fascinating facts behind the impressive monument.

We then strolled through the  Roman Forum where the centre of Roman public life used to be and saw what is left from all these important structures of ancient times. Luciana with her vast knowledge of Roman history helped us imagine how Rome was during these times and how it became the city that it is now.

We ended up in Piazza Venezia, where we admired the monument of Vittorio Emanuele II the first king of Italy and Palazzo Venezia. Our guide also showed us where Mussolini was giving his speeches and where Napoleon’s Bonaparte family used to live.

Passing through impressive Palazzos and small alleys we ended up in Rome’s most impressive fountain, the Fontana di Trevi. It is the largest Baroque fountain in the city completed in 1762. Don’t forget to throw a coin into the fountain so that you will return to Rome.

We then walked towards Via del Corso, one of Rome’s main shopping streets and did some window shopping in the impressive Galleria Alberto Sordi., before heading to Piazza Colonna.  The piazza was named by the marble column of Marcus Aurelius that stood there since 193 AD. One of the most famous buildings in the square is Palazzo Chigi, which is now the official residence of the Prime Minister.

Our next stop was a famous gelateria near Pantheon with over 150 ice cream flavors where we were offered ice cream. With so many flavors it is hard to choose!

After the short, refreshing break, we visited one of Rome’s most impressive buildings, the Pantheon, which means the temple of every God. The current building was completed in 126 AD by Emperor Hadrian. It managed to survive through the years because of its continuous use. From the 7th century, it was used as a church dedicated to St Mary and the Martyrs.

It was then time to visit one of Rome’s most beautiful squares, Piazza Navona. Our guide explained to us its history and what the famous fountains represented including the famous Fountain of the Four Rivers created by Bernini.

After a short walk from Piazza Navona, we boarded on the company’s bus that took us to the second part of our tour, the Vatican. As it was lunchtime we had an hour and a half break to eat something before our next tour at the Vatican Museums. There is a large selection of bars and restaurants to choose from, in the area.

At the agreed time we met our guide and started walking towards the Vatican Museums. Once more the tour included skipping the line tickets, which I found very helpful. The lines to enter the museums were huge. As there is so much to see in the Vatican Museums booking a tour is highly recommended.

Our guide showed us the highlights of the museum that included the Gallery of the Statues, Sala Rotonda, Sala degli Animali, the impressive Gallery of the Maps, the Carpet Room, Raphael’s Rooms and of course Michelangelo’s famous work, the  Sistine Chappel among others.

Our 3-hour tour concluded in St Peter’s Basilica one of the largest and most impressive churches in the world. It was there that our guide left us before telling us a few facts about the church and what we shouldn’t miss. The Basilica is enormous and full of artwork (don’t miss Michelangelo’s Pieta sculpture)  and we had the opportunity to admire it in our pace before making our way to the top of the Dome.

I was very impressed by our guide’s knowledge of Rome. She made our tour of the city very enjoyable and fun without us being bored even though the tour lasted 8 hours.  Although we were 15 people in our group, our guide called us all with our names and made sure she knew where we were coming from and what we liked. It made me feel that we were a big group of friends. Another positive thing is the skip the line tickets to the museums. We saved many hours that day with them. You have to see to believe it how long the queues were. Lastly, I think that the tour inside the Vatican was the most difficult part of the day as it was crowded and hot. Even under these circumstances, our guide managed to make it very enjoyable.

I totally recommend that you do a tour with Take Walks while in the country. They are professionals, and their tours are both educational and fun.

How to spend 2 weeks in Italy

A weekend in Rome.

Where to stay in Rome

Things to do in Rome at night

Things to do in the Vatican City.

A complete guide to Rome.

I was a guest of Walks of Italy but as always opinions are my own.