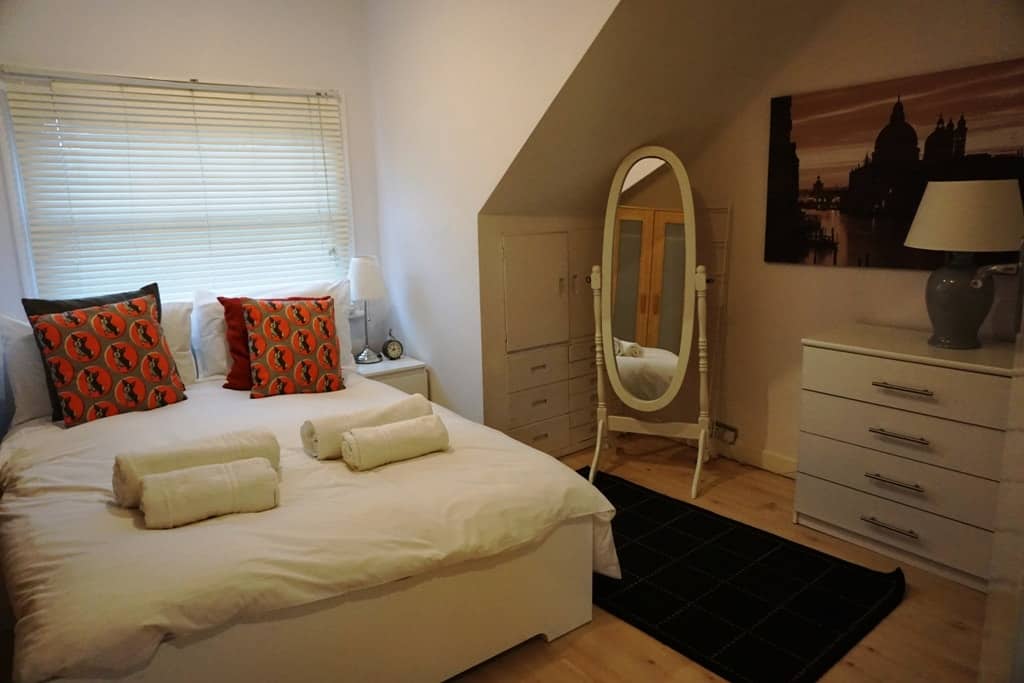 Last year, I stayed at a luxurious apartment in London’s Earls Court neighborhood. We booked it online though City Relay, a London-based company that offers luxury flats in London and Paris. This year, I went with a friend and stayed just one night at another of their properties, this time in West Kensington/Earl’s Court.

The process of booking a flat through City Relay is very straightforward. We selected the flat on their website and paid online. Immediately, we had a confirmation email.

We were given the option of picking the keys up at the City Relay offices, or of meeting someone at the flat. We chose to meet at the flat, so at the agreed upon time we met the agent with the keys. She showed us inside, where there was a bottle of wine, water, and flowers waiting for us. She also gave us a quick tour of the flat and showed us how some of the appliances worked.

This two-bedroom flat is mere minutes from the West Kensington tube station, and a short walk from Richmond Park, the Golden Triangle, and plenty of great, local bars and restaurants. Three of London’s most famous museums are located in Kensington. Often called the Golden Triangle, they are the V&A (Victoria and Albert) Museum, the Natural History Museum, and the Science Museum.

The West Kensington underground station is on the District Line. The London Tube provides easy access into the City and all of the exciting London attractions like Tower of London, Westminster Abbey and Big Ben, St James Park, Kew Gardens, and Richmond. You can also reach Notting Hill, Chelsea, and Soho within a short time. Wimbledon is accessible on the District line, if you’re in London during the famous tennis tournament!

The contemporary style flat was on the top floor of a traditional English brick building. There was no lift, which meant that we got to live like a true Londoner for a night and walk up two flights of stairs! It had two bedrooms, a large living area, a spacious modern kitchen, and one bathroom. There were plenty of large windows, including some skylights, so the flat was bright and airy during the day. It had hardwood floors and plush rugs.

Our cozy bedrooms were both equipped with double beds, complete with crisp, clean sheets, fluffy pillows, comfortable duvets, and thick mattresses. Towels and travel sized toiletries were provided for us too. After a long day of exploring London, coming home to a relaxing, quiet space was just what we needed!

Both bedrooms and the one bathroom had plenty of storage space. If you are spending more than one night here, there is enough space for everyone to unpack and really make it feel like home. The bathroom is fitted out with all modern hardware and a large shower. Everything is white and crisp. It felt very contemporary and clean.

The main room was spacious and modern, with light wooden furniture and a dark sleek-lined couch. It is an open plan room, meaning that the kitchen is adjacent. A small dining table lay just under the window. It seats up to four people. The kitchen space also has several bar stools along the marble counter. The large couch pulls out to a double bed, making this flat perfect for up to six people. Both the kitchen and living space are equipped with all modern appliances, like a flat screen television, electric oven and range, microwave, and electric water kettle. All of the kitchen appliances we could want were there as well, from pots and pans to baking dishes, and all utensils, glassware, and dishware. Coffee, tea, and sugar were provided for us too.

Additional amenities during our stay included high speed wireless internet, a washing machine, dishwasher, ironing board and iron, and toaster. If you would like to do any laundry whilst staying there, you need to bring your own detergent. Upon check out, we were given the option to leave the keys in a certain place or drop them at the office. We chose to leave the keys, but had we dropped them off, they would have held our luggage for us if we needed them to!

This lovely, modern flat in the heart of Kensington was perfect for our one night stay in London, but it would be an ideal place for a small family or group of friends to spend several nights. It is close enough to the city to enjoy all that London has to offer, but it feels very homey and is in a quiet neighbourhood.

I highly recommend that you book one of the City Relay if you plan to visit London. They have a great selection of flats to choose from; the flats are all modern, luxurious, and centrally located. Our interactions with the staff were professional and friendly, as well, and I cannot recommend them enough.

Things to do in London in winter

Things to do in Camden Town, London

Best places to visit in Devon