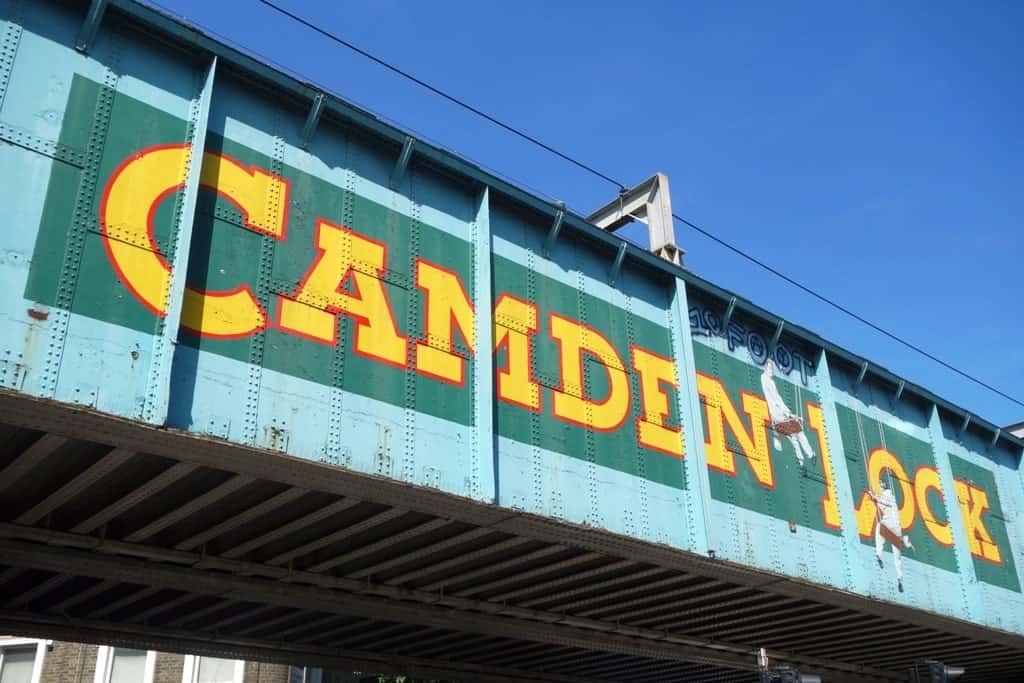 The song by Suggs entitled ‘Camden Town’ has the lyrics ‘In Camden Town, you can do, anything you want to….’ and they’re not far wrong! This vibrant and eclectic North London borough was once the Rock n Roll capital but now caters to almost all alternative tastes with punks, hippies, goths, emos, metalheads, rockers, and those who love vintage all hanging out here, alongside the tourists!

Camden is literally buzzing with energy and full of creativity and colour, a heady vibe that isn’t found anywhere else in the city. Sometimes referred to as Britain’s musical mecca, Camden Town is well known for being the former stomping ground of the late Amy Winehouse, and is where the bands Coldplay and Madness were created, Camden also being the local watering hole for Blur and Oasis band members in the 90’s, it thought that the famous feud between both bands started in The Good Mixer pub!

It’s very easy to reach Camden Town whether by tube, bus, or walking – It’s about a 30 minute walk from King’s Cross or roughly a 40 minutes walk from Oxford Street. So, explore the top attractions, enjoy the street music, and wander the narrow alleys selling everything as you enter an alternative world where anything goes.

Things to do and see in Camden Town London

Camden Market is one of, if not the, most popular attraction in Camden Town for shopaholics with alternative tastes. People who haven’t been to Camden Town before mistakenly think that Camden Market is one entity but it’s actually a sprawling maze of smaller markets with different names made up of roughly 1,000 shops, stalls, and eateries.

Inverness Street Market sells footwear, clothing, souvenirs and fresh produce whilst indoors on a Sunday you’ll find more clothes for sale at the Electric Ballroom. Essentially, the further back you walk into the market the less tacky and commercial the findings so it’s worth starting at the back at Stables Market where the real treasures are and then working your way forward.

Camden High Street shouldn’t be missed either, you can get a tattoo or piercing, buy some Doc Martins, shop for union jack souvenirs, add some items to your vintage or goth wardrobe, shop for retro-style homewares, or even visit vintage-style beauticians and hairdressers for a classic new look!

Tap Your Feet to the Beat

Camden Town is a party town with the focus on live music performances whether that’s from some big-name acts known the world over, or artists who have yet to make it mainstream. With so many pubs and bars to choose from, each with its own unique vibe and musical focus (jazz, blues, metal, rock, pop, even burlesque), there’s certainly something for everyone to enjoy, the only problem being how to narrow down where to go first!

It’s not all about music and alcohol though, there’s comedy at Camden Highlight, and a variety of fringe performances taking place at the Etcetera Theatre plus festivals that take place over the year.

The Camden Rocks festival is held for a weekend either in June or July depending how the dates fall, for 4 weeks in July-August the Camden Fringe Festival takes place and in September a variety of events take place for the Camden Festival with picnics and outdoor movie nights. Then, wrapping up the year before Christmas festivities, RtCT (Return to Camden Town) brings traditional Irish music and dance to the streets in October.

You may have thought that Camden revolves around music and shopping but you’ll also find The Roundhouse putting on theatrical performances, edgy art exhibitions taking place at The Cob Gallery, and the Camden Arts Centre impressing visitors with its modern visual art displays along with creative workshops. If pop culture combined with photography is your thing, visit the Proud Gallery and look at the prints that document fashion, music and pop culture mostly through the Rock n Roll era.

If you enjoy hunting for and viewing street art, Camden has it – It’s not the most famous place for street art in London but works by Banksy have been popping up in Camden since the 90’s and there are other works (including sculptures) that will have you stopping in your tracks too so take the time to wander off the tourist trail.

Think of Camden and museums and architecture aren’t the first thing that come to mind but you can uncover some surprising hidden gems.

The origins of English folk music and folk dancing can be discovered at the award-winning Cecil Sharp House, check to see what this centre for folk art has planned as there are often live shows as well as workshops and exhibitions that change regularly.

You can also learn about Jewish heritage at the Jewish Museum which has permanent exhibitions telling the history of Jews in England through film and photos along with the recreation of a typical East End London street that literally putting you back in time. They also have temporary exhibitions, so check to see what’s on and you can always pop into the kosher cafe too.

If architecture is your thing, be sure to walk past the Carreras Cigarette Factory located behind Mornington Crescent Station – It’s an art-deco building done in the early 20th century Egyptian Revival style with columns and two giant black cats either side of the entrance.

Take a walk along Regent’s Canal on a sunny day and enjoy a moment of tranquillity away from the hustle and bustle of city life. If you follow the walking/jogging/cycling trails far enough you’ll reach Paddington but if that sounds like a little too much effort, hop on boat and cruise down the canal! You can take an organized boat trip to Little Venice on a canal boat barge, passing right through the middle of London Zoo in Regent’s Park. You can also hire a boat for private use, a great way to spend an afternoon with friends.

The world’s cuisine can be found in Camden Town whether you’re on a tight budget and have to fill your belly on street food at the markets or can splash out on a romantic meal for two at a high-end restaurant. Enjoy fish and chips from the local chippie, feast on Asian, Italian, or Greek cuisine, dig into BBQ, try South African delicacies, or devour some vegetarian nosh.

Planning a trip to London? Check out my guides:

How to spend 7 days in London

Winter in London: Things to do and see

The best Christmas markets in the UK

11 thoughts on “6 Things to Do in Camden Town London”