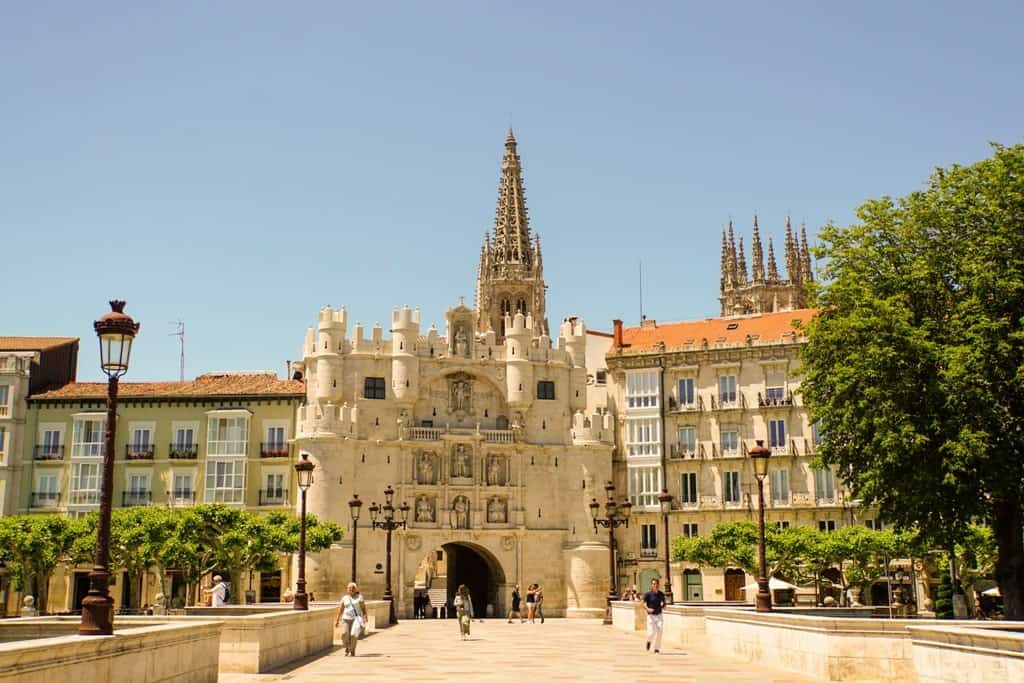 The lesser-known town of Burgos is one of Spain’s quaint, provincial towns that is marked by its medieval architecture including the landmark structure, the Burgos Cathedral. Once a walled city, Burgos is framed by a dozen city arches that would have allowed entrance into this ancient community.  As you wander the city streets of Burgos, you will marvel at the picturesque Gothic and Renaissance architecture that makes this town a burgeoning tourist attraction. Read on to discover the best things to see and do in Burgos, Spain.

7 Things to Do in Burgos, Spain in One day

While the Burgos Cathedral in Spain is relatively unknown compared to Barcelona’s Sagrada Familia and La Almudena Cathedral in Madrid, it is still a stunning work of architecture that has made its way into the UNESCO World Heritage List for its ‘Outstanding Universal Value’.

Officially entitled “Santa Iglesia Catedral Basílica Metropolitana de Santa María de Burgos”, the Burgos Cathedral is a Gothic-style Catholic church that was built between the 13th and 18th centuries. It is also one of the most impressive and important stops on the Camino de Santiago pilgrim trail.

Located in the San Fernando Plaza, this mammoth monument features myriad intricate designs such as stained-glass windows, statued façades and towering spires that keep you enthralled at every look.

Not only is the exterior fabulous, but the interior also features elaborate design which can be discovered with an insightful audio guide hired from the entrance. Witnessing the Papamoscas (Flycatcher) Clock, the Chapels of the Presentation, San Enrique and Santa Ana, and The Golden Staircase are all must-sees, as is the altarpiece in the main chapel.

You can book your tickets online or buy them from the ticket office in San Fernando Plaza (cost at the time of writing €7 for adults, €2 for children under 14).

If you haven’t had your fix of impressive architectural sites after visiting the Burgos Cathedral, then fear not as Burgos has loads more inspiring sites to keep you entertained! One of these such sites is the Arco de Santa María, one of the 12 medieval doors to the city of Burgos.

This castle-like archway was originally built during the middle ages and was reconstructed by the Roman Emperor Charles V during the 16th century. The facade of Arco de Santa María is the most elaborate of all of the city gates and features turrets and sculptures that make for a pretty grand entrance to the town. It’s worth visiting the gate during both the day and night as the lighting makes a huge difference to the arch’s design.

Plaza Mayor is perhaps the heart of Burgos, with colourful buildings and a bright, open square welcoming visitors from around the world. With the Burgos Cathedral looming in the background, this square is a hub of activity from day to night, with children playing and people sitting on benches in the sun, and people dancing and drinking when the sun goes down. The streets leading off Plaza Mayor are a wonderful place to grab a drink or dine on tapas of an evening when the jovial ambience makes the square feel full of life.

The Santa María la Real de Las Huelgas monastery is a working convent located around 1.5 km west of the city of Burgos that can be reached in about 30 minutes from the Plaza Major. The only way to visit the monastery is to take a guided tour (available in English and Spanish), which allows you to enjoy an insight into the history and architectural significance of the site.

The Monasterio de las Huelgas is a Spanish Royal Site thanks to the royal privileges that Alfonso VIII of Castile and his wife, Eleanor of England, were granted during the 12th century. The monastery is currently home to around 36 ‘Bernadines’, nuns of the Spanish Congregation of St. Bernard. The Abbey is a truly beautiful work of architecture and is also home to a unique collection of art and textiles.

If you’re looking for something a bit more modern (although something that looks back as far as the beginning of humanity), you might be interested in the Museum of Human Evolution. This educational museum features fossils found in Atapuerca (an archaeological site nearby) and looks at the changes in humanity and the relationship of humans with nature over the past few millennia.

The museum boasts a range of exhibitions including reproductions of our 10 former ancestors, different milestones in the evolution of culture, and recreations of the main ecosystems that humans have lived in and evolved in over the past few centuries.

For the most spectacular views of the city of Burgos, head up to the Mirador del Castillo. While the walk is fairly steep and strenuous, the views are most definitely worth it! Seeing the Burgos Cathedral from this angle is really breath-taking and witnessing it at sunset is particularly special. The space at the top is safe and structured and has copper signs to enable you to work out which buildings you can see from the Mirador.

Things to Do near Burgos

Outside of the city of Burgos lies a further selection of sites and attractions that you can visit during your time in Castile and León.

The Benedictine Monastery ‘Santo Domingo de Silos’ is a stunning building thought to have been founded as far back at the 7th century. The monastery site then undertook major works during the 11th century when first a Romanesque and then later a Neoclassical temple were built.

The Romanesque cloisters are another impressive section of the monastery which are decorated with symbols and reliefs. Visitors can enjoy a guided tour (perhaps by one of the monks) and if you’re lucky you may be able to visit during a service when the monks will be performing their famous Gregorian chants.

For a taste of nature and the great outdoors, a visit to La Yecla Natural Park is a must. Desfiladero de La Yecla is located around an hour from Burgos and is home to a deep gorge in the Valley of Arlanza surrounded by forests and rocky outcrops.

The gorge is zig-zagged with bridges and footpaths that allow you to walk thorugh the valley, and while it may seem a little exhilirating it is safe and secure and is a great trip to take with children. La Yecla Natural Park is also a wonderful place for bird watching as it is home to creatures such as the griffon vulture which fly overhead as you walk through the gorge.

Whether you’ve heard of Burgos before or not, I hope you’re now inspired to discover this Gothic, Renaissance, Romanesque-inspired town. Burgos is a real hub of cultural attractions, with stunning works of architecture to keep you interested and entertained.

The area of Castile and León in Spain boasts more than 2.000 monuments from the Romanesque period, our visit to Burgos and the surrounding area was part of the Romanesque route.

The trip was organized by Transromanica, a company specializing in exploring the Romanesque Routes of European Heritage. Through cultural tourism, Transromanica works to bring to light the spectacular features of Romanesque architecture and highlight the cultural, architectural, and historical similarities between heritage sites from Portugal to Romania. Transromanica also promotes sustainable tourism across the network ensuring these fascinating sites are here to explore for many more years to come.  As always opinions are my own.

Planning a trip to Spain? Check out my guides:

Best Places to visit in Spain

How to spend 10 days in Spain

How to spend 7 days in Spain

The best day trips from Madrid

The best day trips from Barcelona